How do we test filaments? – Heat resistance

In 3D printing, heat resistance is one of the crucial issues when it comes to choose the right filament for a given purpose. When we look at this topic, first of all, we have to clarify the method of the measurements we apply to determine the heat resistance of the filaments.

In materials science, there are several different measurements of heat resistance, which usually differ in the type and extent of the heat load. The most commonly used are Vicat softening point and different HDT (Heat Deflection Temperature) measurements. Unfortunately, these measurements in practice provide us only indicative values.

In contrast to chemically pure materials (such as iron), the melting of plastics does happen at a given temperature, but a continuous softening can be observed.

Exactly how long a 3D printed object will withstand a given impact without permanent deformation can only be determined by specific tests. 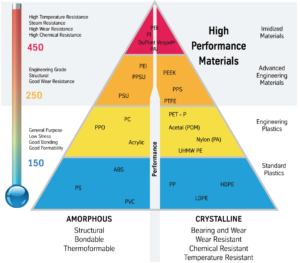 From the above it is clear, that it is not enough to take into account the HDT or Vicat values ​​on the data sheet when choosing a material for 3D printing. To get the big picture, the geometry of the object, the degree of heat load, but because of the transition of crystallization phases, also the printing parameters have to be taken into account.

Thus, in the case of PLA, a heat resistance of up to 150 degrees can be achieved – with appropriate geometry and printing parameters – which is quite different from the 55 °C temperature, which is written in the most of the literatures. 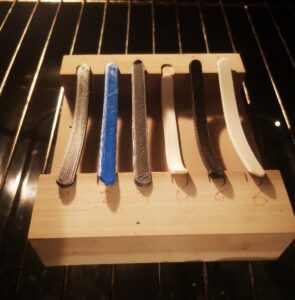 In the first case, we put a 3 mm thick and 100 mm long 3D printed stick in a special holder and place it in an electric oven at room temperature. In addition to the oven temperature, the temperature of the test object itself is measured with an infrared thermometer. As a first step, we heat the oven to 50 °C and then we raise the temperature by 15-20 degrees till that point, where the specimen loses its shape and bends. 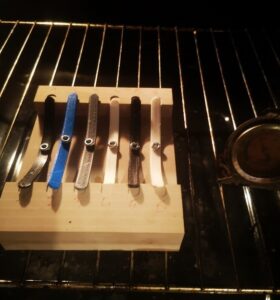 The second test is very similar to the first one, the difference is that a small weight is placed on the specimen, thus simulating load impact.

Then the values ​​obtained this way can be used to estimate the heat resistance of the filament well.